Paul Geddes on turning Direct Line into a brand-driven business 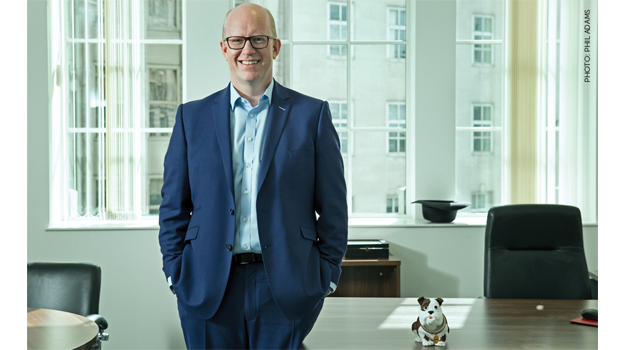 The CEO and former marketer is committed to creating differentiation in what many consider a commodity marketplace.

Paul Geddes does not subscribe to the notion that all marketers should aspire to become CEOs. This is the route he took himself, having started his career as a marketer for brands such as Max Factor and Pampers at Procter & Gamble, before rising through various job moves to become CEO at insurance giant Direct Line Group (DLG). Geddes is one of around 20 bosses in the FTSE 100 with a marketing or sales background, but he believes the preoccupation with how marketers can become CEOs is misplaced.

“In many ways, chief marketing officer is the best job in the world,” he says. “As CMO, you spend more of your time doing the things you love with people you have affinity with; as CEO, you do less of that. It’s not a race and nor is the only destination CEO. I think CMO is a fantastic job which people could very happily aspire to and retire from.”

READ MORE: How to become a CEO

Geddes’ career history demonstrates the additional weight of responsibility CMOs need to take on if they wish to make the next step up. He became CEO in 2009, following the financial crisis and the taxpayer-funded bailout of DLG’s parent company at the time, RBS Group. Then known as RBS Insurance, DLG was divested through a flotation on the London Stock Exchange in 2012.

Prior to taking the top job at DLG, Geddes spent three years as CEO at RBS’s UK retail banking business. When the financial crisis hit in 2008, prompting the collapse of RBS’s investment banking division, Geddes had to work quickly to reassure staff and customers about the future of the bank and its UK subsidiary NatWest.

“I had 30,000 people [working] in the branches that were at the sharp end of dealing with customers through what was a stressful period for them and staff,” he recalls. “What that highlighted to me was the importance of engaging with your people.

“[Staff] were personally affected by their personal situation with RBS, worrying about their jobs and shares and all those sorts of things, while also having to reassure customers who were worried about what was happening to their money. It was an important experience for me in really communicating well with your people so that they understand what you’re trying to do as a business.”

The challenges continued to mount once Geddes moved to the insurance division. Under European Union rules, RBS was compelled to sell its insurance business as a condition of its receipt of a £45bn bailout from the UK Government. This required major restructuring to make DLG fit for purpose as a standalone business. In 2013, Geddes oversaw £130m of cost-saving measures, including 1,400 redundancies, the discontinuation of unprofitable business lines and  a reduction in the number of offices from 32 to 15.

Such hard-headed business decisions are rarely associated with marketers. When Geddes became CEO of the insurance business, he says he had a tough task in convincing fellow executives of his credentials. Prior to heading up RBS’s retail bank, Geddes was RBS head of marketing and before that he held marketing director roles at retailers Comet and Argos (see CV, below).

“People might think you’re a bit fluffy or flaky or a bit soft on commercial measures,” he notes. “You have to show people that you can think commercially about delivery and hitting hard KPIs, not just soft KPIs. You never forget the stuff you’re good at but you need to add to it the stuff that you’re less proven at – or that people might suspect you’re not good at.”

How marketing rebuilt the business

Nevertheless, Geddes’ background and his original skill set as a marketer have played a significant role in the reorganisation of DLG during his tenure as CEO.

It now operates a ‘house of brands’ model, comprising Direct Line, Churchill, Privilege, Green Flag and NIG. These brands are managed with marketing principles front of mind, with each offering different types of insurance at different price points to distinct customer segments.

The group’s latest financial results, published last month, show a business in robust shape. Operating profit rose by 3% in 2015 to £520.7m on revenues of £3.3bn, while dividends per share for the year almost doubled. The fortunes of the insurance industry are subject to a complex set of variables, such as the effects of extreme weather conditions like flooding and the ability of underwriters to set premiums at fair but profitable rates. Amid these technical factors, marketing plays a vital role in driving growth through the acquisition and retention of customers.

“Marketing skills are equally valid and used in our sector as [they are] in any other consumer sector,” says Geddes. “We have a house of fantastic brands where, for us, marketing is not just about advertising, it’s about ‘what are the propositions, what’s the customer experience and how are we going to win in the marketplace?’.”

Direct Line is the group’s premium brand, charging the highest prices for the best level of service. It is also one of a few insurance brands (notably including Aviva and certain Zurich policies) that are not listed on comparison websites. Instead, Direct Line targets consumers who put greater emphasis on quality of service and brand reputation over price. This is reflected in its ‘Winston Wolf’ advertising campaign, winner of the Chartered Institute of Marketing’s large campaign of the year award last week, which uses actor Harvey Keitel’s character from the film Pulp Fiction to convey Direct Line’s positioning as a brand that can fix problems quickly and effectively.

The group’s other brands are listed on comparison sites, but Geddes insists they also have their own clearly defined identities and target segments. With its iconic nodding dog character, Churchill appeals to older customers who are drawn to its association with traditional British values of resilience and dependability, for example. Privilege, on the other hand, has a more modern image that appeals to younger people looking for cheap deals.

Underlying these different brand propositions is a group-wide commitment to customer retention. In its 2015 results, DLG reports that its customer ‘retention ratio’ was one percentage point higher than in 2014 across the group, while the Direct Line brand’s net promoter score rose 7.5 points as it launched new products such as a seven-day car repair guarantee and next-day delivery of cash or replacements for stolen or damaged items.

Geddes believes most people are apathetic about buying insurance, noting “it’s not a product you look forward to using”. Given this reticence, he argues there is plenty of scope to win customers over. “When using the product, it tends to be at a time of stress – you’ve just had a car accident or a burglary or fire in your home,” he says.

“People have low expectations about insurance and think it’s going to be really hard work where they’ll have to do lots of paperwork and we’re going to quibble about stuff [during the claims process]. To wow people is actually quite easy in a sector where expectations are quite low.”

Technology is one aspect of what Geddes sees as DLG’s wow factor. The company is investing in connected car and home services that aim to improve the exchange of personal data with customers and reduce the likelihood of accidents, though such services are at an early stage. Tech innovation plays a more prominent role in reshaping the way the business transacts with customers, Geddes says, such as by speeding up the buying and claiming process.

For example, Direct Line now offers a live video service where customers can film the damage to their insured property on their mobile devices and send the footage to a customer service assistant who can confirm the claim on the same day. The group has also invested in its social media teams to improve customer response times and recently rolled out “new quote and buy journeys” on some of its websites to streamline the purchase process.

Geddes explains: “Our business is about managing when something goes wrong and putting it right quickly and efficiently. Therefore a lot of our innovation is focused on making that quicker and easier so that there’s less hassle and less time off work [for the customer]. That’s what innovation is about for us.”

Alongside this focus on efficiency, Geddes is keen to retain the human touch. Prior to the floods across much of Cumbria last December, Direct Line staff visited homes to warn them to move their possessions upstairs, and had branded vans and Land Rovers available to help stranded residents.

“Our objective again was to wow customers through that experience by being there for them,”  says Geddes. “An event like that is our moment of truth and a great opportunity to say, ‘this is what we do’.”

Beyond ‘price and stuffed toys’

Geddes leaves the day-to-day marketing challenges at DLG to his group-wide marketing director Mark Evans, but retains a keen interest in the discipline through his role as a fellowship mentor at The Marketing Academy. He is also an advocate for the benefits of building a marketing career in financial services – an industry often seen as less exciting than FMCG or retail. Direct Line Group is nominated in the ‘best place to work’ category in this year’s Marketing Week Awards, winners of which will be announced on 12 May.

“You could think [insurance is] a purely commoditised marketplace but it isn’t – people do seem to respond well to good brands,” he insists. “Insurance is probably not one of the customer’s favourite things to buy but within that constraint, there are lots of opportunities to surprise them. To have advertising that isn’t cheesy – that’s not just talking about price and stuffed toys – that’s surprising and actually quite fun.”

The ‘stuffed toys’ remark is a clear dig at comparison website rivals such as Confused.com and Comparethemarket.com, which have built their brands around cuddly characters and promotional giveaways. By contrast, Geddes argues that Direct Line’s ‘Winston Wolf’ campaign, created by its agency Saatchi & Saatchi in 2014, has given the brand a “cool”, grown-up edge that helps it stand out in the market.

He concedes that the campaign has divided opinion between, on the one hand, customers who are unaware of the original Winston Wolf character from Pulp Fiction, and on the other, those who are fans of the film and feel aggrieved that a brand has co-opted the character. However, he insists that having a bold “big idea” is important to build the brand’s identity.

“Not everyone will like every ad – if you’re going to do stuff that has cut-through, there will always be some people where it’s not their cup of tea and people who scratch their heads and say ‘who is this guy?’,” adds Geddes.

“The insurance marketplace is an empty space if we are talking about brands – our competitors are clearly staking out territories around us, but for us to be a relevant, modern, digital brand, we can be a little bit brave on Direct Line. That’s one of the benefits of us having more than one brand [in the group].”

Indeed, this is where Geddes’ marketing background and general management duties come together. The business has grown out of the trauma of the financial crisis by spreading its bets carefully across its different brands, but has also strived to build trust in these brands by focusing on customer needs and the customer experience.

“It’s a very noisy marketplace, and you need something that cuts through and has some executional excitement,” suggests Geddes. “Most importantly, that needs to be allied to really strong and relevant customer messages.”